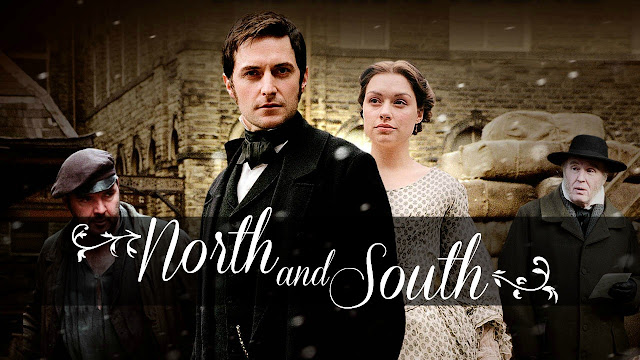 Today's the day! There is a poll in the sidebar for you all to have fun with, and this nice long presentation on North and South, my favorite BBC of all time!

The poll in the sidebar is for you all to vote on your favorite "secondary character" from N&S. The winners will be featured in the next post.

I know I am posting this late in the day, but I figure many of you are on different time zones, so the "day" could mean a completely different time for you. :)

So, without further ado.... 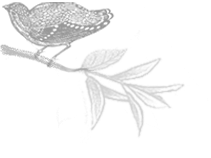 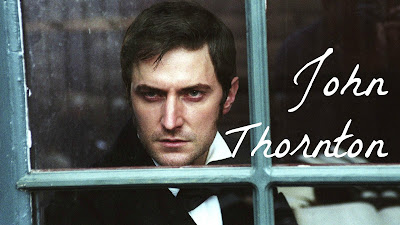 Mr. Thornton is the owner of Marlborough Mills in Milton. We first catch sight of him standing on a platform in his cotton mill observing his workers with a stern and flitting eye. He is a man of few words, but when he speaks he means what he says. At first he sees Margaret as getting in the way and interfering with his methods of running his mill, and it angers him to see her helping the workers when they go on strike. However, he cannot resist the love that he begins to feel for her, and that, well, that's what makes him such an believable character, the way he portrays his emotions so well and really shows his feelings for Margaret despite his initial disapproval of her. Mr. John Thornton is played by Richard Armitage. 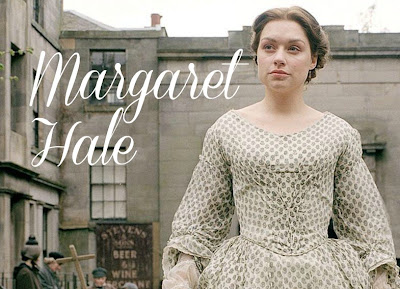 Margaret Hale is a determined, spirited young woman whose father has given up being a minister and has moved the family to Milton. While her father tutors, Margaret helps her ailing mother tend the household, and take care of things. But many a day brings her into the streets where she helps the poor workers and gets to know some as real friends. She first sees Mr. Thornton beating a worker in his mill and tries to stop him, much to his fury. She tells him what she thinks of the way he treats his employees and backs her opinion in her actions throughout the story, when sometimes she takes sides with them instead of with him. However, Margaret begins to have feelings for Mr. Thornton soon enough, and begins to regret his disapproval of her after a misleading incident at the train station late at night. Margaret Hale is played by Daniela Denby-Ashe. 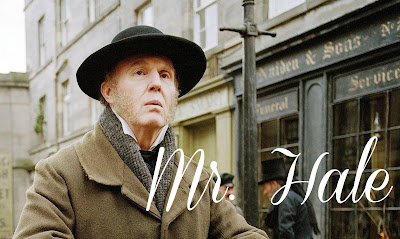 Mr. Hale has brought his family to Milton after he gave up his country parish in the South on matters of conscience. He takes up teaching privately and publicly, and is a quiet man, kind, and cares very much for his family. Mr. Hale is played by Tim Piggot Smith. 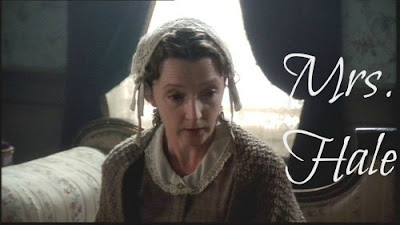 Mrs. Hale is a frail woman with sensitive feelings and misses her home in the south very much. She dislikes Milton, but tries to be cordial and hospitable to the few people she meets there. Mrs. Hale is played by Lesley Manville. Frederick Hale is Margret's brother, who left home when Margret was young to join the Navy. Through a series of mishaps, a mutiny, and heroism on his part which was not recognized by others, he ended up on the wrong side of the Navy and had to flee to Spain to escape brutal consequences. (Sorry I couldn't find a better picture of him!) Frederick Hale is played by Rupert Evan. 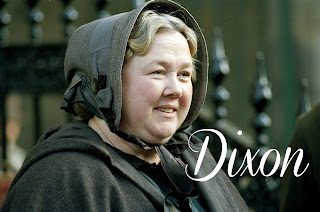 Dixon is the Hales' maid. I really like her, she is so sweet and loyal to the Hales, has been with the family for years, and certainly feels for their plight like she was a member of the family, but she does get huffy when people track mud in the house. :) Dixon is played by Pauline Quirke. 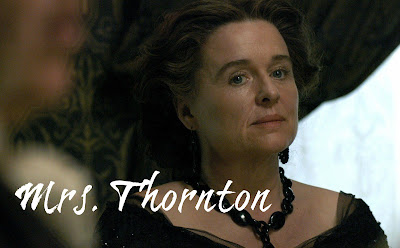 Mrs. Thornton is John Thornton's mother. Sometimes I don't know if I like her or not. She greatly loves her son, and feels for him so deeply when the mill takes a turn for the worse. Initially she is snotty towards the Hales, but then she starts to almost admire Margret when she gets to know her more, and her son begins falling in love with her. But then, she turns back around, and she flip flops too much and I'm not sure what to think of her sometimes. :) She is played by Sinead Cusack. 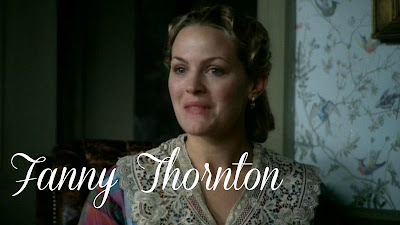 Fanny Thornton is John Thornton's sister. She certainly is not afraid to speak her mind. She and her mother come to meet the Hales now that her brother is renting a residence to them. She shows her disdain for the society of these folks from down south, but eventually warms up to them, though never completely. I did not like her; my brother thought she was hilarious. Fanny is played by Jo Joyner. 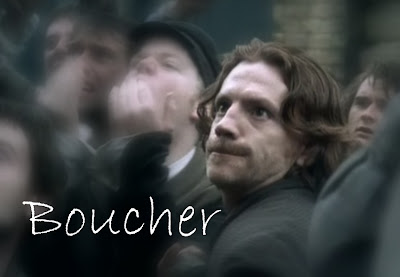 Boucher is a young father working at the mill with many hungry little ones and a wife at home whom he feeds as best he can afford. He is strongly against the strike, and only is concerned with his family's well being. He ends up taking desperate measures when things take a turn for the worse. I liked him, even though he was a bit irrational towards the end, but he became a hunted man and for that I pitied him. Boucher is played by William Houston.

Higgins. This guy was great. In the beginning he seemed a bit strong-headed and rough around the edges, but as the movie progressed I quickly learned to like him. He, contrary to Boucher, was concerned with the well-being and humane treatment of the employees as a whole, and was not shaken at the idea of holding out a strike in order to be paid fairly. *SPOILER* He ends up taking in Boucher's children after his death and for that I greatly, greatly admired him, considering he had just lost his own daughter and was just as poor as Boucher had been. *END OF SPOILER* Higgins is played by Brendan Coyle.

At the heart of this story is the tempestuous relationship between Margaret Hale, a young woman from a southern middle class family who finds herself uprooted to the north, and John Thornton, a formerly poverty-stricken cotton mill owner terrified of losing the viability of his business.
Around them are class struggles between the workers and mill owners and ideological struggles between the industrial North and the agrarian South. After moving North, Margaret's father befriends his student Mr. Thornton. Margaret has already formed her opinion of Mr. Thornton independently after seeing him treat his workers harshly. As the series progresses, she and we the audience begin to learn that his strict treatment is due to an overarching concern for his
mill and by extension, his employees. John Thornton, on the other hand, is attracted to Margaret's independence and position in society as a well-educated Southerner. As in "Pride and Prejudice" the marriage proposal comes in the middle of the series and is rejected by Margaret. Contrary to "Pride and Prejudice" it is mirrored in social upheaval as the entire town is brought to its knees by a strike. The latter half of the series is an unraveling of the former misunderstandings ending in a romantic reconciliation which is again mirrored by reconciliation between workers and mill owners. 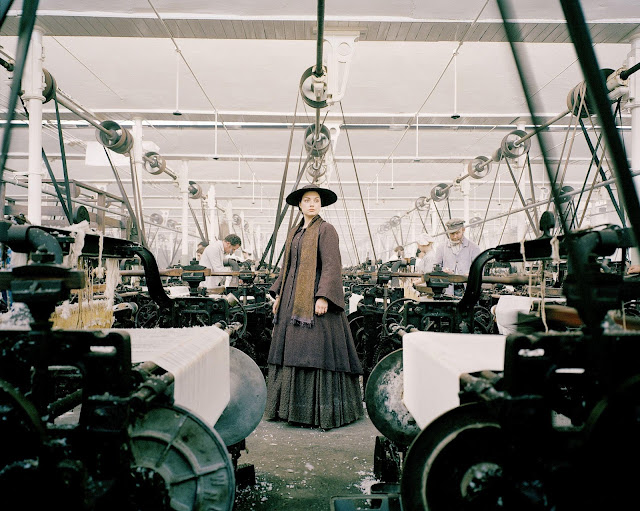 And now for my favorite scene from the movie. Everyone loves the ending, as do I, but I also thought this part one of my favorites as well...

And, to appease the crowd, here is the ending scene. I figured you can't do a post about North and South without the ending scene.
Warning: if you don't like kissing scenes, skip this one! :)

I loved the soundtrack to this movie. While I was watching it I did not notice it as much (the story itself was so riveting), but when I looked up the soundtrack I quite enjoyed it. Here are a couple of my favorites...


This is the "Opening Theme". I liked the slideshow this person put together with stills and quotes from the movie.

I liked this piece so much I transcribed it for piano and I play it very often!
(Too often for one to maintain their sanity, in Mom's opinion :)

And of course, "Northbound Train" from the ending of the movie.

And here are some beautiful desktop wallpapers for you all that I found on Fanpop. 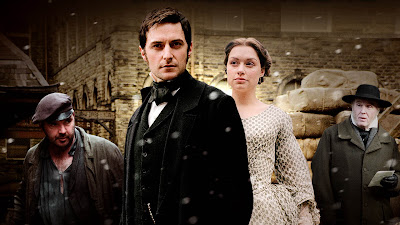 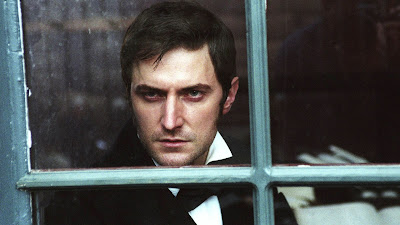 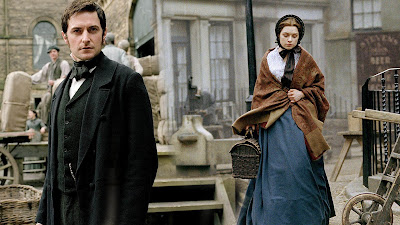 Well this does wrap up the post. I would have to say North and South is my favorite BBC period drama of all. Pride and Prejudice 1995 was my favorite for ages until I saw this and, well, P&P stepped down to second place.

I hope you have enjoyed the post! What is your favorite part from N&S? Your favorite characters? Favorite quotes? Do leave a comment if you feel thus inclined!

Have a lovely evening,

From the pen of Unknown written at 8:09 PM

My favorite scene is defintely the train station scene at the end... so romantic. I also liked the scene when Miss Hale first enters the cotton factory. I remember thinking how it was very artistically done. "North and South" is a great movie.

I can't pick a favorite scene. They're all too awesome. :)

This was actually one of the few movies in which I noticed the soundtrack during the film - I instantly loved it and proceeded to listen to it over and over and over again.

Favorite characters...well, OF COURSE Margaret and Mr. Thornton. :p I didn't really care for Margaret's parents, but I rather liked Mrs. Thornton. I like how she's tough but she really loves her son.

On the topic of North and South, I've never seen it. I'll have to put it on my list.

I wanted to let you know that I tagged you over at my blog! :) http://thegoldenroadblog.blogspot.com/2012/10/just-because-tag.html

North and South is probably my favorite movie. I love all of the scenes, it would be so hard to choose between them! My favorite characters are, of course, Margaret and Mr. Thornton, but I really like Nicholas Higgins as well. They are all interesting in their own way, though.

Oh my, such a wonderful movie! I love the piece you transcribed! I wish I could do things like that with piano, but unfortunately for me, I just read music. I did find a music book with the theme from the BBC Pride and Prejudice in it, though, and P&P is still my favorite. ;) It's just lighter, and more happy (although North and South certainly ends happily). Have you ever read the book North and South? It's somewhat different, and probably why I like P&P better - the book and movie adaptation are very complementary. =)

Other posts of interest.... 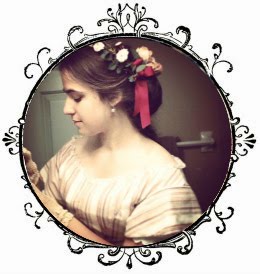 My name is Miss Elizabeth, and I'm so glad you stopped by. Do grab a cup of tea and enjoy your stay! 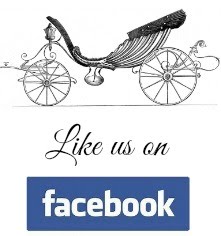 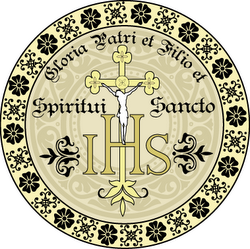 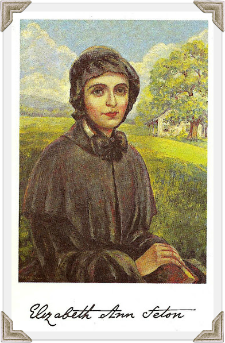